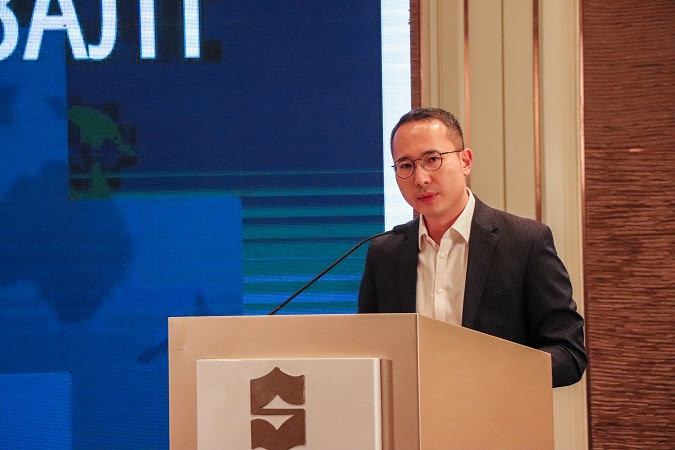 The Business Council of Mongolia’s (BCM) March Monthly Meeting was held on March 28 at the Shangri-La Hotel, with Chairman B.Byambasaikhan hosting for an audience of around 100 members and invited guests. The topic of the meeting was the “Study on the role of government based on the principles of the Mongolian Constitution for sustainable social development.”

BCM Board Member and CEO of Clean Energy Asia Mr. Orchlon opened up the third meeting of the year. Orchlon was also recently named as one of Forbes' Asia 30 Under 30.

In 2018, BCM held comprehensive board elections to elect the 15 members of the Board of Directors. “BCM is the most well-placed platform to be able to unite and align the public sector with the private sector with the policymakers,” he stated.

As part of BCM’s mission to build this alignment at the Board level, six Working Groups, all headed by Board Members, are being driven vigorously and energetically. An update on the activities of these Working Groups will be emailed to members next week.

New members also received their Certificate of Membership after the presentation and panel:

The key objective of this meeting was to present the results of an eight-month study by TUS Solution LLC and hold a discussion on the results. 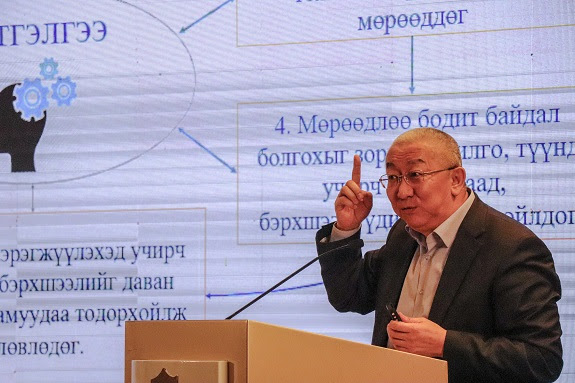 Mr. D.Jargalsaikhan presented the results of the study named above. Jargalsaikhan is on the BCM’s Board of Directors and chairs the Economic Freedom and Competitiveness Working Group. He is also the Chairman of TUS Solution LLC as well as Founder and Chairman of the Young Researcher Support Foundation.

In 2017, a smaller-scale study on the same topic produced interesting results, which prompted the Director of TUS Solution to broaden the study to see if the results held. The team working on this more recent studied comprised an eclectic group of professionals from various fields: philosophy, sociology, psychology, public health, theoretical mathematics, political science, business, and law.

Most studies on the Constitution of Mongolia are conducted by lawyers and other legal experts. Studying the Constitution from a systems analysis viewpoint is something novel which has rarely been considered. To use the metaphor of a house, when something malfunctions in the house, we form or already have a mental image of what or where the problem lies, and perhaps how to solve the malfunction. Like a house, the Constitution is an abstraction of interrelated ideas that is unique from and greater than the sum of its parts.

The study was an attempt to form a sort of “mental image” of society and the constitution, perhaps something Plato might call the “ideal state” of the “form” of the Constitution of Mongolia – something which can never be reached but something which we must continually strive for.

As a humble disclaimer, Mr. Jargalsaikhan noted that this study was the first of its kind and that there can be areas of improvement on future investigations.

Certainly a complex and intricate topic to grasp, and at times reading off like aWittgensteinian treatise, but highly useful nonetheless.

The 5 axioms of a living system:

The study had two key objectives:

There is the key phrase and "mission" in the preamble of the Constitution, "aspiring toward the supreme objective of building a humane, civil and democratic society in the country." So how well is that aspiration being realized  today?

Results of the study

After the presentation, a panel discussion was held to discuss the study. Moderating the panel was B.Bolor-Erdene, Founder and Editor-in-Chief of trends.mn, and the panelists were: 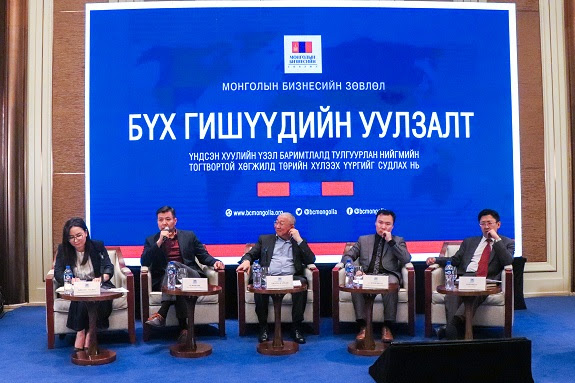 With the political backdrop of the controversial legal amendment recently initiated by President Battulga and swiftly ratified by parliament, many panelists alluded both directly and indirectly to the turn of events in the political scene, generally in dismay.

One of several things that the panelists agreed on was the need for legal reform, whether that be in the form of constitutional amendments or making sure subordinate laws align with the constitution. "There are labor unions in Mongolia whose 'constitution' is older than our national Constitution," said one panelist.

Given the variety of backgrounds among the panelists, people saw the issue from different angles. Whereas a businessman or economist anticipates risks or hindrances, the lawyer generally looks in hindsight, saying "here is where we went wrong." However, lawyers do not possess a monopoly on discussion of the Constitution, stated Enkhbayar.

The first organization to implement systems engineering comprehensively was the US Department of Defense, and the second was NASA. However, systems modeling can be harnessed to improve the effectiveness of any organization big or small, or in the case of the study, society as a whole.

One tangential topic raised by Erdenebold was the surge of online fake news, trolls, and other such thing which have an effect on society, and the capacity to influence elections. We must be very aware of this and the challenge this presents for democracies, he stated.

As mentioned by Erdenebold, in the end, the checks and balance and separation of powers must be ensured by the constitution, and that if this is lost, generations may suffer as a result.

The BCM would like to extend our appreciation to all the presenters, panelists, and attendees of the Monthly Meeting.