On May 23, 2019, more than 600 individuals from the Government of Mongolia, private sector, representatives of NGOs, and domestic and international experts participated in the “2019 International New Energy Summit.”

During the Summit, a signing ceremony was held for the Unified Call of the “Gobi Clean Energy Alliance.” Relevant associations, federations, and corporate executives joined the alliance and pledged to harness the Gobi region’s abundant clean energy resources, develop production, and export energy.

Across the world, people are reducing their usage of traditional energy sources and transitioning to clean energy. According to a study conducted by the Asian Development Bank and Ministry of Energy, it is possible for Mongolia to establish a power transmission network in line with international standards and use its domestic clean energy resources to supply the increasing demand for energy in Northeast Asia.

Harnessing the clean energy potential of the Gobi and exporting power to the region is beneficial not only for the Mongolian economy and interests of its citizens, but also for the world, by helping to reduce carbon emissions responsible for climate change.

During the Eastern Economic Forum held in Vladivostok in September 2018, President of Mongolia Battulga Khaltmaa raised the idea of establishing a regional coordinating organization for a Northeast Asian power grid, which would be the most efficient and cost-effective way to bring down the power load during peak hours. Organizations unifying under the Alliance support this initiative and emphasized that using the Gobi region’s clean energy will have a tremendous impact on the development of Mongolia’s energy sector, economy of Northeast Asia, infrastructure cooperation and development, and the ambition to make Mongolia a clean energy exporter.

During the signing ceremony 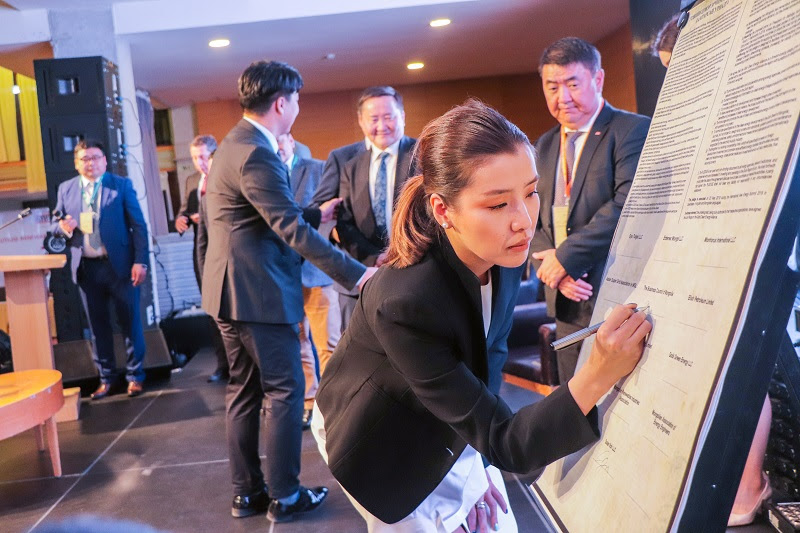 During the New Economic Forum held on May 13, H.E. President of Mongolia Khaltmaa Battulga announced to meet with business leaders to freely discuss issues and challenges. On May 18, BCM Board Directors, along with other business leaders, joined the President in free discussion at the “no-tie meeting.”

The exchange rate of the Mongolian currency Tugrik against the U.S. dollar fell by 10 percent year on year in Jan-April, data released by the Mongolian National Statistics Office (NSO) showed Tuesday.
At the end of last month, the exchange rate of the U.S. dollar against the Tugrik stood at 2,634.93, said the NSO. Tugrik also depreciated by 3.2 percent against the Chinese yuan.
The Mongolian national currency's depreciation was mainly related to continuous increase in imports, according to experts of the statistical agency.
The value of the Asian country's total imports amounted to 1.8 billion dollars in the Jan-April period, up 11.7 percent from the same period last year.
The Bank of Mongolia has provided more than 600 million dollars to private banks so far this year to manage foreign currency reserves, according to a bank statement.

CONSTRUCTION OF TAVANTOLGOI-ZUUNBAYAN RAILWAY TO COMMENCE THIS WEEK

The Government is planning to inaugurate the construction of 416.6 km railway from Tavantolgoi to Zuunbayan on May 24. The Minister of Road and Transportation Enkh-Amgalan Byambasuren announced that soldiers will help finish the task. Also, it is estimated that MNT 750 billion will be spent on the project.
The domestic transport revenue of the Tavantolgoi-Gashuunsukhait railway is about USD 8, while the transport revenue of the Tavantolgoi-Zuunbayan railway will be USD 20 (per what? Add measure). The Tavantolgoi-Zuunbayan railway line is scheduled to be completed in 2020 starting from May. A total of 3,647 people will work on the construction of the tunnel and dam, while 1,144 people will participate in building the other development works.

Ministry of Food, Agriculture and Light Industry began selling reserve meat this weekend through extended trade fairs in additional 10 locations in an effort to moderate the fast-rising meat prices.
Thousands of people are queuing up to four hours because of the high demand for affordable meat. It was reported that each person can buy five to six kilograms of meat at maximum, which means those who want or need more meat at a bargain will need to go to the back of the line to purchase more.
Prices at these extended expos are 7,200 MNT per kilogram of beef, 6,000 MNT per kilogram of mutton, and 5,500 MNT per kilogram of goat meat. Prepared meat are packaged in two or three kilograms.

Mongolia exported 54900 tonnes of meat and meat products in 2018 – a 20 year high. But because of bungled management, the population of Ulaanbaatar, where half of Mongolians live, is experiencing meat shortages. Prices have simply skyrocketed beyond what people can afford. For a nation of meat-eaters, this is hard to cope with!
In order to solve this problem, the cabinet is planning to impose quotas on lamb and goat meat exports due to the shortages in the capital. Ironically, the number of livestock in Mongolia reached 85 million head this year; however, people in Ulaanbaatar can no longer afford to eat meat on a daily basis because of the prohibitive prices.
Currently, the price of beef has reached MNT 16,000 per kg at the big markets in Ulaanbaatar. The Mongolian government’s effort for stabilizing meats price has become ineffective.

Kaisun Holdings Limited and China Railway Engineering Construction Mongolia have signed an agreement for the construction of the Mongolia Choir Railway Platform. This project opens up logistic opportunities along the China, Mongolia and Russia corridor by providing full supply chain management services to the region, and enhancing the development of logistics along the Belt and Road megaproject.
Mongolia Choir Railway Platform is one of the largest private enterprises in Mongolia. The railway platform in the town of Choir is located in the middle eastern part of the country, and around 250 kilometers away from the capital Ulaanbaatar, covering a total area of 35,000 square meters, with an annual loading capacity of 1.8 million tons. The cooperation between Kaisun Holdings and China Railway Engineering Construction Mongolia will further strengthen economic ties between Mainland China – Hong Kong – Mongolia.

From the 1st of May this year, the Mongolian Immigration agency started issuing some types of visa permits in electronic way.
With the current modification, citizens and legal entities are not required to go to the Immigration agency in person in order to submit the visa permit requests in paper form or to obtain the related decisions and approvals in paper form.
Within the National program “E-Government” aimed at providing fast and citizen-oriented public services, the Mongolian immigration agency has introduced, as the initial step, the online services for granting the visa permits of tourist “J” and business “B” types for single entry and business “B” type for multiple entry visas.
As such, the applications for visa permits of temporary visitors for stay of 31-90 days and multiple entry visas for 30 days, which are issued at the Mongolian diplomatic and consular missions, as well as visa permits to be issued at the international border checkpoints of Mongolia may be filed electronically.

At the Cabinet meeting on May 22, Minister of Construction and Urban Development Kh.Badelkhan was tasked to approve a plan of action of the National Program ‘150 thousand households- Apartments’ within the second quarter of the year and ensure its implementation.
According to the program, it is planned to connect 10 thousand private houses with basic infrastructure facilities, re-plan ger areas to construct apartments for 45 thousand households, demolish outdated apartment buildings to build new apartments for 3000 households, construct rental apartments for 18488 households as well as others.
Actions and funding required for the program implementation will be reflected in annual Basic Guideline to develop the country’s socio-economy, state and local budgets, and will be resolved within public and private partnership.
The program will be implemented in five years between 2019 and 2023.

The annual Car-Free Day continues to reach out to wider audience with an array of activities and entertainment aimed to promote healthy lifestyle and create a healthy, safe and comfortable living environment for residents.
Car-Free Day takes place in Ulaanbaatar on every Saturday of the third week of May. This year, it was held on May 18 under the slogan “Together for Risk-Free and Healthy Environment” and also marked the 380th anniversary of the establishment of the capital. As usual, the police restricted traffic movement in the city center, closed large markets and shopping centers, and temporarily altered bus routes to assist the event and allow locals to exercise by walking, ride bicycles, and running on auto roads.