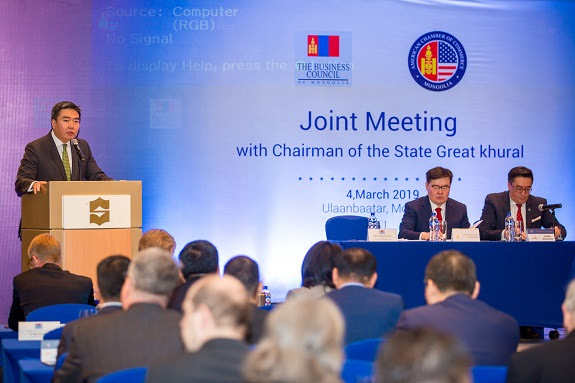 A joint Monthly Meeting was organized by the Business Council of Mongolia (BCM) and the American Chamber of Commerce in Mongolia (AmCham) on Monday, 4 March 2019 at the Shangri-La Hotel, with the newly-appointed Chairman of the State Great Khural (Speaker of Parliament) Mr. Zandanshatar Gombojav as the guest of honor.

The BCM’s purpose is to serve its members to ensure economic freedoms and property rights as enshrined in the Constitution of Mongolia are protected, by engaging with the public, its members, and the government.

AmCham and the BCM have worked closely in the past year, especially regarding corporate income tax and other tax reform issues.

Chairman of AmCham Mr. Oybek Khalilov congratulated Speaker Zandanshatar on his election to the highest office in the legislative body.

SPEECH BY CHAIRMAN OF THE STATE GREAT KHURAL MR. ZANDANSHATAR 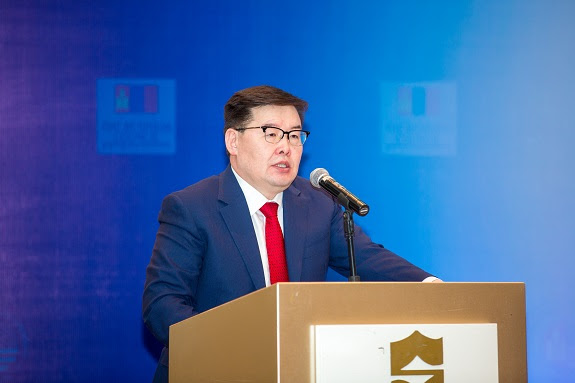 To start off, the Chairman of the State Great Khural (Speaker of Parliament) gave an update on the current economic climate. The government and parliament are making efforts to make the business and investment environment more stable and protect the interests of investors, he said.

A brief update on the current economic situation:

According to IMF’s Extended Fund Facility review, Mongolia’s economy is recovering, but we are aware of risks associated with commodity prices

The government has begun large-scale projects such as the oil refinery and the wastewater treatment plant.

This spring the Tavan Tolgoi railroads and other road projects will also commence.

The government has adopted the Three-Pillar Development Policy, which shall be the cornerstones of development:

“Listening to investors’ needs is an important part of our economic agenda to create a more predictable and stable investment and trade environment,” said the Speaker

The government has established the Investment Protection Council (IPC), which features a regular consultation mechanism and addresses grievances of investors. This is in part due to the transparency agreement with the US. This mechanism prevents the adoption of laws pertaining to business and investment without prior consultation with the private sector.

With assistance from the World Bank, the government is implementing Public-Private Dialogue (PPD).

Another project in the works is the “Digital Parliament Project,” which comprises three components:

The Speaker requests cooperation of the BCM and AmCham in assisting to build the capacity of parliament to translate draft laws and other government documents.

In line with investment policies, the National Development Agency and World Bank Group are working on investment reform mapping: comprehensive analysis and assessment of current investment and legal environment of Mongolia.

A One-Stop Service Center for investors was recently established, providing foreign investors with legal and market information and assisting with registration of legal entities and residence permits. In the future, the center will also provide info regarding customs and taxes.

The Speaker wrapped up by saying “To conclude, let me express my concern about the rule of law. I believe that laws on investment are much dependent on trust. The only guarantee of gaining confidence is to ensure that the laws and rules are clear and enforced. Each case must be handled according to the law without any interference. In brief, it is a matter of the strong rule of law. Therefore, it is essential that officials at all levels of office, all levels of public service strictly follow ethical standards and norms, be committed and accountable, and adhere to the principles of fairness and justice. That is why Parliament announced this year as the Year of Citizen-Centered Public Service. Taking this opportunity, I would like to assure that both parliament and government continue to pay special attention to continuous improvement of the legal and regulatory environment for investors.”

Question from BCM Chairman Byambasaikhan: There has not been much news about the IPC recently. I understand there has been structural changes. Since you were the Chair of the IPC in the past, would you brief us on recent IPC activities and future plans?

Speaker Zandanshatar: IPC operations are continually improving, but we are planning to submit a new law on investment. An extraordinary session of parliament is planned for mid-March, during which legislators will debate the Law on Investment and General Law on Taxation. In the future, we plan to start an independent body for foreign investment protection. Before 2012, we used to have the Foreign Investment Agency, responsible for protecting FDI in Mongolia. The IPC’s activities have not slowed down and are improving.

Question by Jay Liotta from MahoneyLiotta: Mongolia made the choice in the 1990s to have an independent, private sector-driven economy. We have seen great strides in development since then, but in the last 10-12 years, we have seen an erosion of that with legislation making it difficult for private sector growth. Most recently, we have seen the growth of state-owned enterprises and a big drive for the state to create jobs. Has Mongolia given up on an independent, private-sector driven economy?

Speaker: Since the 1990s, Mongolia has been striving to establish democratic institutions in the public sector and a market-oriented economy. In recent years, Erdenes Tavan Tolgoi has been a big player in the economy as a state-owned enterprise, due to the commodity prices. In such a small economy, the contribution of major SOEs may look significant. Erdenet and ETT are paying almost 30% of the total tax income of Mongolia. That is why the role of SOEs is increasing. However, compared to China and other economies, the government and parliament are still eager to promote our private sector. Parliament is planning and extraordinary session in March, where we plan to discuss the Law on Concessions, Corporate Income Tax Law, and Personal Income Tax Law. These laws are aimed at supporting and promoting the private sector. Most importantly, we will create a 1% tax environment for small and medium-sized enterprises.
The government is set on issuing an IPO for Erdenes Tavan Tolgoi. There are also discussions regarding a potential IPO for Erdenet Copper.
The top priority at this moment is to ensure economic recovery and overcome the financial difficulties (debt burdens). That is why the role of government is increasing. 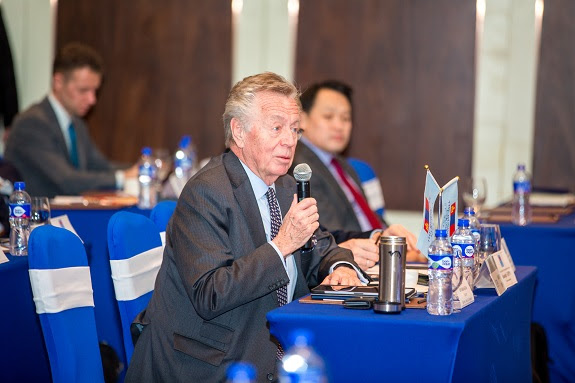 Question from Randolph Koppa of TDB: We see some pending legislation that causes some worry. With the 22 tons of gold purchased by the central bank, with the trade surplus, and increase in foreign investment, why would there be a consideration in the currency laws to control through the central bank the inflows of foreign exchange from exports, which would effectively dismantle the two-tier banking system?

Speaker: The central bank is implementing banking sector reform in cooperation with the IMF, and the government is also paying greater attention to money laundering to address suspicious cash flows. Recently we acknowledged that we don’t have sufficient information about export payments from overseas. On the other hand, we want to introduce have a liberal economy, but also want to control money laundering, so the question is how to strike a balance in these two things.

Question from Byambasaikhan: Parliament is currently is currently in the process of discussing amendments to the Law on Renewable Energy. This sector has been able to attract over half a billion dollars of real investment, and I understand that the current drafts in discussion will significantly change the system that allowed this private investment money to come in without any government guarantees purely on the back of strong power purchase agreements. Many companies are concerned that the change in rules will affect the flow of investment into the renewable energy sector. When is the Law on Renewable Energy going to be discussed or passed?

Question from Chairman of AmCham Khalilov: In 2013 the US-Mongolia Transparency Agreement was first introduced, and was then ratified in 2017. What were the latest steps in terms of the implementation of the Agreement?

Speaker: I mentioned in my speech about the Transparency Agreement and digital forum. We are trying to form our legislative process during the extraordinary session in March. I would to cooperate with BCM and AmCham to translate bills and laws in accordance with the transparency agreement. Currently we do not have sufficient capacity in parliament to do this. Most importantly, we will introduce the e-parliament project, where will have e-information, e-participation and e-voting applications. In this regard, the business community, BCM, AmCham, etc. can participate in the debate concerning draft laws. Draft laws which get adopted will be available immediately in digital form; however, translations will take some time.

Comment and question from Chairman Byambasaikhan: Your proposal to work together with BCM is welcome, and we can establish a task force comprised of our members to work on this. You mentioned about constitutional amendments in the works. Lots of businesses are anxiously waiting for time frames, as we don’t want to have false expectations. 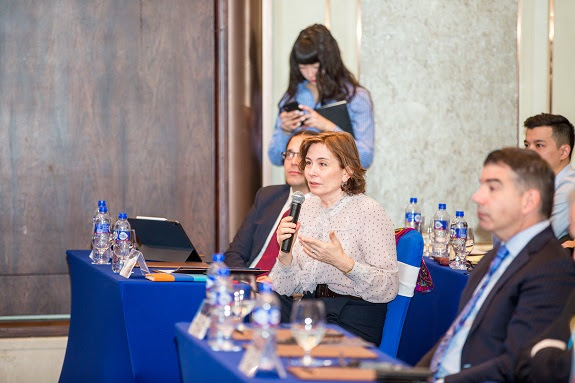 Question from EBRD Country Director Irina Kravchenko: It sounds encouraging for international and private investors, and we would like to see results through these reforms announced. We understand the difficulties the economy has faced and are glad to see it recovering. Honoring agreements made in whatever sector is crucial for investment stability. There is some worry about changes to regulations regarding renewable energy, not only regarding new investments, but also old ones?
Also, how is the progress regarding the development of public-private partnerships? International debt is still high despite reductions. Are there any considerations in the government to push forward these structures? You have huge investment needs which cannot all be resolved through sovereign lending or soft loans and concessional loans.

Speaker: I would like to thank you Irina and the EBRD for the continued support for Mongolia through soft loans for the private sector. This spring, we start major railroad and road projects, so this year will be a very constructive year for Mongolia. Regarding public-private partnerships, we are now working with the National Development Association, which will submit to us a package of laws to support our business community. It will be the first law covering PPPs. There will be a bill on social responsibility, and we have already received a bill on professional associations. In order to have a united voice of business communities, we need to strengthen our chambers of commerce and professional associations.
The government and parliament are listening to the business community, but the business community need to unite their voices and consolidate opinions, sometimes advocating for contradictory things. The question of PPPs will be debated in parliament in the autumn session. 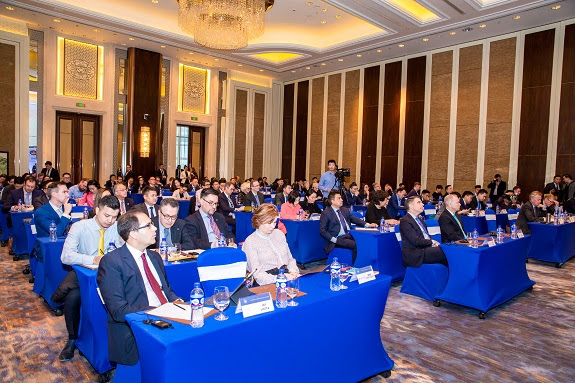 The BCM and AmCham would like to extend our appreciation to Speaker Zandanshatar, and to all the attendees of this joint special Monthly Meeting.